Back to List
Press
The Intrepid Explorer, Leaping From Lush to Spiky 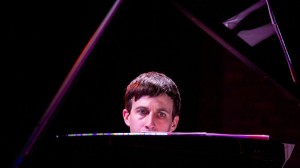 "A recital by a thoughtful young pianist in a basement performance space that seats about 150 people may not seem particularly significant. Yet on Monday night at SubCulture, as I listened to the pianist Benjamin Hochman’s sensitive, exciting renditions of four contemporary works that explore the form of theme and variation (including one premiere), I kept thinking that classical music doesn’t get better than this.

Here was a brilliant, self-effacing 33-year-old artist who simply wanted to share his enthusiasm for some formidable sets of variations in an ideally intimate setting, ending with the composer Frederic Rzewski’s epic, nearly hourlong 36 variations on a popular Chilean resistance song, “The People United Will Never Be Defeated,” written in 1975. The recital was part of a 92nd Street Y series at SubCulture, the new mini-concert-hall and bar under the Lynn Redgrave Theater in the East Village.

Mr. Hochman has always shown natural curiosity about old and new music. Last fall the Avie label released his solo recording titled “Homage to Schubert,” with elegant, impressive accounts of two Schubert sonatas, along with two contemporary works in tribute to that composer by Jörg Widmann and Gyorgy Kurtag.

Mr. Hochman spoke to his audience on Monday about each piece on the program and about the genre of theme and variations, an exercise in exploration where a theme, sometimes a simple one, is investigated for all its possibilities. He opened with Oliver Knussen’s Variations (1989). The theme is just an elemental statement of a few emphatic notes.

The variations, however, unfold in music of constantly shifting moods, character and intensity. At times, the music is plush with crystalline colorings and melting harmonies, which Mr. Hochman played gorgeously. Then the work bursts into fidgety stretches of keyboard-spanning lines, like a pointillist toccata.

Before playing the next work, Berio’s “Cinque Variazione” (1952-53), Mr. Hochman suggested to audience members that instead of trying to follow the individual variations, they listen to the overall flow and sweep of this piece. And in his rhapsodic performance, this ingenious, complex modernist score indeed sounded like a fantasy.

The first half ended with the premiere of “Frédéric Variations,” by the composer Tamar Muskal, who wrote the piece for Mr. Hochman. The title refers to Chopin. Ms. Muskal took as a theme his Étude No. 2 from “Trois Nouvelles Études,” a lilting, hazy work. In Ms. Muskal’s variations, that étude soon becomes fractured and frenzied, setting off a long, expansive, sometimes fitful exploration, with pummeling rhythms, spiky chords and onrushing riffs.

The Rzewski work, which, as Mr. Hochman writes, has become “something of a cult hit,” begins with the protest song stated in thumping octaves, then turns into a kind of swinging, mellow jazzy dance. From then on, for nearly an hour, the tune is transfigured into variations based on milky arpeggios, staggered chord bursts, twisting strands of clashing counterpoint, hints of Rachmaninoff and Bach swathed in a modernist haze, what could be a Scottish air and more. The inventiveness of the piece is staggering. So is its difficulty, though you would not have guessed this from Mr. Hochman’s commanding performance."